In the week from 8th to 12th April 2019 our Dutch exchange students visited Hagen. We were really looking forward to it. On Monday, 8th April, the exchange students arrived at our school. Then we had lunch with lots of nice fingerfood which had been prepared by our parents. After that we went up the steep hill to the Eugen-Richter-Tower. Back at school the exchange students were informed about the upcoming activities by interesting PPTs and they were guided through our school building in groups. Finally, we drove to our host families. In the beginning it was difficult to communicate with each other but by the end of the week we were used to speaking English. 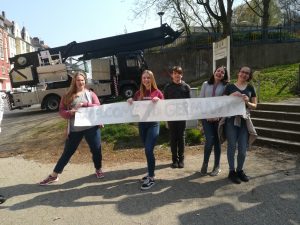 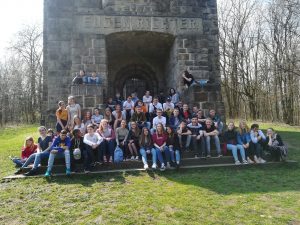 On Tuesday we had a great and funny day in Cologne. We set off quite early in the morning and everybody was still a little bit tired. When we arrived in Cologne we started with a city rally through the Old Town of Cologne with a special app called
“Bipacours”. The city rally guided us to the well-known Cathedral in Cologne. And there we had a special tour with headsets through the Cathedral. After that all of us were tired and therefore we had a picnic at the „Rheinwiesen“. Moreover we attached a lock at “Hohenzollernbrücke” as a symbol of our partnership between FESH school and Driestar College. Then took the boat and had a nice panorama tour on the Rhine. In the afternoon we had free time and went shopping in Cologne. We were quite exhausted when we got back to Hagen. 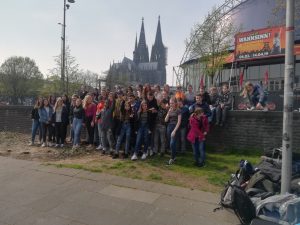 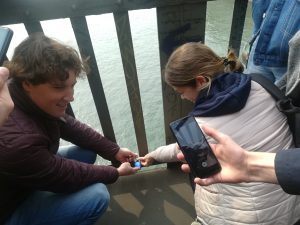 On Wednesday we took the train to the famous Klutertcave. We had an exciting tour through the cave. We also had to crawl on our knees through narrow passages. We all were very dirty and wet. It was a real adventure tour. When we were back in Hagen, we started the “three – towers – tour” and went for a nice but long walk in the forests of Hagen. After that we ate famous hot- dogs at the school canteen.

On Thursday we went on an interesting trip to an old gas silo which is called “Gasometer” in Oberhausen. In the gas silo we did a difficult quiz about the current exhibition (“Der Berg ruft”). After a short break we presented the typical German “Currywurst” to our exchange students. In the afternoon we had a lot of free time to do a lot of nice things. And then the last day already began.

On Friday we met at the gym and played some funny games and did an interview which was really cool. After an Easter service, the Dutch students said good bye and drove back home. I never had such an interesting and funny exchange like that. I really hope that we´ll keep in touch.